(Not quite for the post, just what I was listening to on repeat as I typed this. :P)

I got a little note going on later in the post, so feel free to stick around until you reach the bottom.

Yay! So I went to my first con and it was really fun! I went and saw one of those local comic cons that like to take place in hotels, but there was a surprising amount of people there. Even the curator was surprised, he said that at least 1,000 or more seats were filled that day and I was pretty impressed.

I saved up a ton knowing I’d end up blowing all of my money, and it turns out I did have a little left over. (Like $5…) Three months of saved up money, all towards fandom merch. XD But it was worth it, I’m so glad I walked out of the con with something.

I actually remembered I made a post a long time ago for preparing for cons AND BOY WAS THAT HANDY! Oh my gosh, if I didn’t remember about that post I’d probably have starved myself over there and had to carry everything I bought in my arms. XD

If you want to read that post because you want some tips, you can find that here.

I remembered that I had an extra bag lying around, and I brought that with me and it ended up being my grocery bag because none of the prints I bought fit in my other bags. Also if I didn’t bring water I don’t know how I would’ve survived there. Of course they were selling water, but me and my cheap butt wasn’t having any of that. XD I also brought sixlets for the go and I munched on those instead of buying food. (Later I was happy I didn’t buy any food because I bought more stuff. XD I value exclusive fandom merch over food apparently.)

I didn’t cosplay, because I was saving up for money for the con and not my outfit. Though I wish I did, because they had a cosplay contest and the group I went with could join because they cosplayed. Who knows maybe next year I will?

I hope to cosplay as Garry from Ib at the anime con in the summer, and my friend plans on going as Ib herself so we can group. (*Looses train of thought* I just need a purple wig and a purple overcoat with a huge collar…)

Think I can pull it off?

Who I Was With

So when I got to the con, I immediately saw my group and kinda sprinted towards them because I didn’t want to get lost. XD In the end we did kinda split up because we all wanted to see different sites, and we did loose a person, so the entire day was just, “Oh no, we lost another child, we better find her.”

We kinda just kept loosing people and finding people, then our group kept getting bigger cause we saw around 6 or 9 other people we knew and stuck with them for awhile.

And it was kinda difficult because we all wanted to see different things. We had to navigate, like 5 members, around tight spaces because it was so packed. We ended up doing the human chain, and we grabbed onto each other so we wouldn’t loose one another. XD

So almost EVERYONE was in cosplay. And it was so awesome because I kept asking to take their photo and they let me. XD

My friend, who cosplayed as Todoroki from My Hero Academia, had 18 people ask her to take a photo with them. XD It was kinda funny because she kept count of it all.

Every few minutes someone came up to her for a photo, and we’d all awkwardly watched as she took a selfie with someone. Then after that was said and done, my friend felt really awkward as well because she was out of her comfort zone. But we all reminded her that it was really cool to get asked for a photo and that it was also her own fault for cosplaying as one of the most universally beloved characters from a mainstream anime.

Now on to other cosplayers.

I took a bunch of photos, and as much as I wish I can put them in this post, I cannot because I don’t have any of their permission.

But I can list a bunch of cosplays I seen:

There’s a lot more, like Newt from Fantastic Beasts, a random mage, and a bunch of storm troopers, but this list is already long so I’ll just leave it at that.

A neat thing I also got to see (that I will share with you because I think it’s okay to share a photo of it) is Captain America’s signed shield! 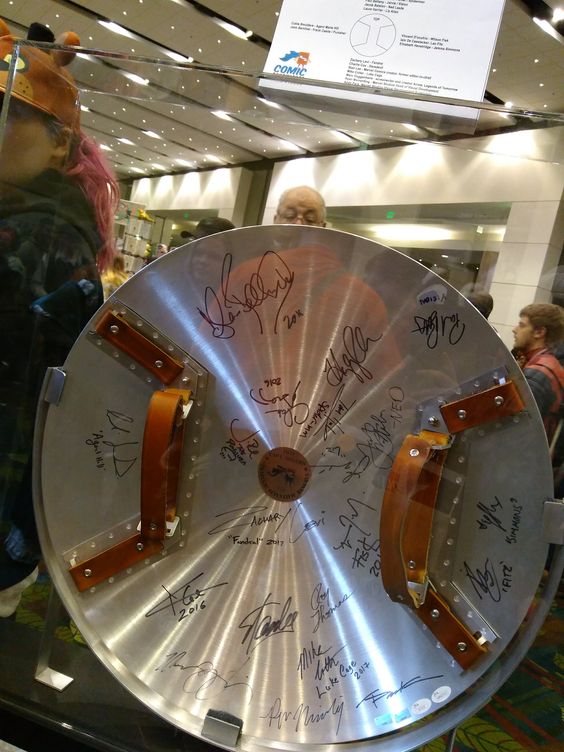 I didn’t get a picture of the front, that part was signed as well, but I got the part with the most signatures.

Whoa boy, I came in not knowing what was in store and ended up coming out with a good amount of stuff. XD

There were lots of vendors to see, and some of them sold at lower prices than the original cost, so I just grabbed what I could.

I ended up getting 2 prints, a manga, a comic, a figurine, a stuffed figure, and lots of business cards. (At least 15.)

I was especially happy with the prints. The first one I got was a poster for Voltron. I was across the room from it when I saw it and inwardly made fangirling noises. My group heard and was like, “What’s wrong with her?“

I then said, “Look!” And when they saw the poster, they immediately understood. One even said, “Go get it child.” And I ran as fast as I could to the other end of the room to buy it. XD

The other print is a beautiful water colored portrait of Your Name. When I saw it, I knew I had to get it, but it was one of the most expensive things sold at the con and I wanted to wait until I knew I scoped out the whole area.

It was pretty expensive, like $20, but when I cleared the area, I went back and bought it with what I had left. I’m so glad that I did too, because IT WAS THE LAST ONE OMG. When I first saw it, the prints were in full stock, and then a few hours later, they were almost all gone!

It now resides right next to my other Your Name poster. XD

As for the figurine and plushie… Well, they’re both YOI. XD As we were walking around, one of the members of my group said, “Oh no. Don’t look over there.” I, being the rebellious spirit, looked over where my friend was looking and saw a bunch of YOI merch.

I held some restraint, ahem, I waited until we found all our group members until I bought the plushie. But I couldn’t help myself with the figurine, I bought that one instantly. : P

Like I said earlier, I got a manga and a comic too.

The manga was just the 2nd volume of Tokyo ESP, which I’ve been meaning to start. But the comic was called Plume and it immediately drew my eye because the art looked so amazing! 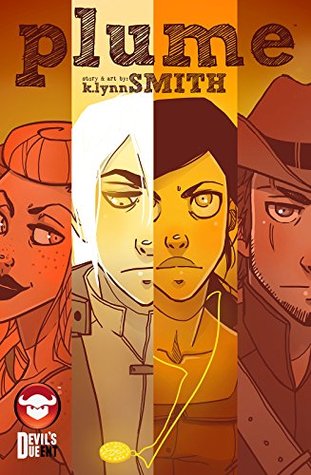 The author/artist of the book was there and she was really sweet! She even signed my copy, which made me pretty happy to say the least. 😀

I only wished I had enough for the first three volumes, but I could only get the 1st one for now. I’ll try and get the others soon enough. There’s another volume coming out too!

But yeah, this comic reminds me of the Old West with a hint of fantasy, so I can’t wait to read it!

There was a cosplay contest like I mentioned, but I didn’t contend in it. However because my friends joined, I waited in line with them for moral support.

It was a long wait, and the line broke out in two sections and wrapped around the second floor because there was just so many cosplayers participating.

When my group gone up, I sat in the audience with my other friend who didn’t participate either. I thought my role for moral support was over but I was wrong.

So, the friend who cosplayed as Todoroki (let’s just call her Todoroki from now on) texted me while I was in the audience saying to shout a line for her when she got on stage.

I was literally shaking from nerves because my brain was screaming saying, “Nyo! I can’t do this!” (I’m never comfortable screaming in the middle of a public area. I mean, I’ll do it, but I’ll be a wreck in the process.)

So I screamed at Todoroki when she got on the stage and she screamed back, which I didn’t expect. It wasn’t until after I screamed that I realized the friend next to me jumped because she was so shocked. And also a few days after the con, another friend told me, “I didn’t expect such a manly voice to come out of you.” XD

The friend next to me had recorded it all, so now she has that moment in time with her forever.

There was a lot to see at the con, I didn’t really talk about the two gaming rooms they had. One was for board games and the other was for the Game Cube. I didn’t spend that long in those rooms because we were all walking around for the most part. But those rooms were pretty chill and I did get to play something there. 🙂

There’ll be more cons that I hope to go to in the future, and maybe I’ll write about them here. It depends on how I’ll be managing my time for this summer. (The cons I want to see all take place in the summer.)

Overall, I had a good time and saw a lot of amazing sites and people!

Extra Side Note About My Absence

Now for why I wasn’t posting in the last two weeks.

So normally I make posts all in one weekend and scatter them around for the rest of the week. And it normally takes a really long time to make posts (like 4-5 hours).

So on one of the weekends, I was kinda busy and had no time. I spent the entire Saturday at a con and the next day I had to study for a bunch of tests. And the weekend after that, I was just really out of it and wasn’t in the mood to make anything at all. So I just had a bunch of me time to play a bunch of games and finish books.

That was almost the case for this weekend too. I was super stressed and then ended up getting sick. Though I’m still sick and stressed, I got off my lazy butt and said, “Hey, make a post.” So I did. 🙂

I’m feeling a little better now. A little stressed out, but I’ve been getting a lot of positive comments from a lot of people on my personal media accounts (not blog related) and it really cheered me up.

So hopefully I’ll keep making posts for you. I won’t always due to just having a crazy schedule, or just wanted to take a personal day and game and binge Scooby Doo. XD (I’ve been doing that lately and drawing, it’s kinda relaxing.) Still, there are times when I just have to write something down, and that will become a post for my blog. 🙂

Now that’s all I have to say for now, stay positive my peeps.

6 thoughts on “First Con Experience! + Little Side Note On My Disappearance”