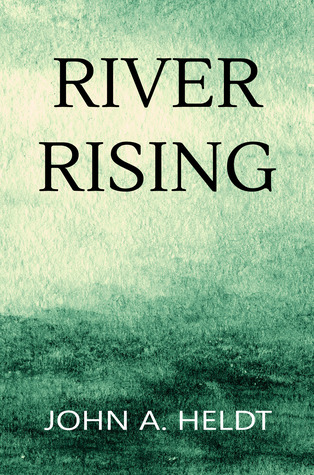 **I have been given a copy of this book from the author in exchange for an honest review.**

WHERE TO BUY: Amazon

River Rising: Weeks after his parents disappear on a hike, engineer Adam Carson, 27, searches for answers. Then he discovers a secret web site and learns his mom and dad are time travelers stuck in the past. Armed with the information he needs to find them, Adam convinces his younger siblings to join him on a rescue mission to the 1880s.

While Greg, the adventurous middle brother, follows leads in the Wild West, Adam, journalist Natalie, and high school seniors Cody and Caitlin do the same in Johnstown, Pennsylvania. Like the residents of the bustling steel community, all are unaware of a flood that will destroy the city on May 31, 1889.

In RIVER RISING, the first novel in the Carson Chronicles series, five young adults find love, danger, and adventure as they experience America in the age of bustle dresses, gunslingers, and robber barons. (Credit: Goodreads)

Review: I really enjoyed this book!

It did take me awhile to finish it, but I was still able to finish this book with a smile at the end regardless of how long it took me to read. (It’s pretty long too, but that never stops me.)

This book was semi-addicting. I could put it down for a period of time, and when I go back to pick it up, I’ll be immersed in the story. It was kind of nice to be able to pick up where I left off every time, and be able to give myself a break too. It’s like each time I did that, I got a fresh start in the story again.

I could tell that the writing and the research of this story was a long process. It was all very thorough with facts on historical moments and details going into the setting of the time period. I had to admire the effort that was put in to all this, I learned a lot of new things while I was reading, and not just vague concepts, but in great depth and detail. It made up a majority of the story, but it’s always nice to pause once in a while to go over the world’s structure.

I found all the characters to be enjoyable too. They did have similar ways of thinking (and their individual stories in the book were quite similar too) but you could distinguish their separate personalities. All lot of them came from well-rounded jobs as well, and they came in handy when time traveling back into the late 1800s.

I could go on about each character and their personal experiences, but to just shorten it up, I’d like to talk about one character this time who I thought had shown great development in the book.

And that is Caitlin.

She started out acting the most unsure about things. She was also very distraught about her parents’ disappearance more than anyone. But she grew a lot in the few months this book took place, and was able to act like a leader for her family. She also spent lots of time reading, which is something I can relate to. 😉 Her character changed dramatically well, and I was happy to see her grow confidence in her own actions.

As far as the other characters go, they all found ways to impress me with their wit, courage, and loyalty. And like Caitlyn, they also had their chances to change in the story.

There was a lot of excitement around the ending of the book. The beginning and middle was mainly build up to the big events towards the end. It definitely worth sticking around the ending to read. There are some parts that may actually shock you. (Ah, feels.)

Overall, I’m really glad I had a chance to read this, I highly enjoyed it. And I hope you all do too. 😀

More: Thanks for reading and visiting my blog! In reality, I haven’t actually written a review for a long time, this was my first in awhile. I’ve been caught up in some things, but hopefully everything is working out. 🙂 I’ve also been having other focuses too. But all in all, I’ll try to keep up with my reading! Thanks again, and I’ll swing by later.