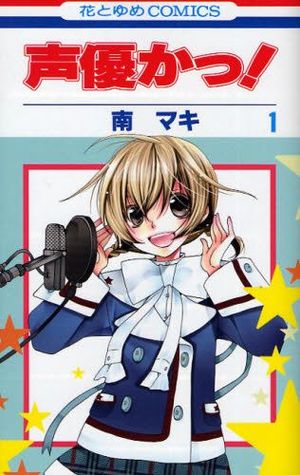 Seiyuu Ka: Kino Hime wanted to be a voice actor for the famous show Lovely Blazers ever since she was small. During a time in her life when she lost all hope, one of the actors, Sakura Aoyama, spoke to a young Hime and inspired her to pursue the dream of being part of the Lovely Blazers cast. However, her dream seems very difficult to accomplish.

So Hime enrolls in a new school for learning how to better her voice acting skills. But her lack of talent catches up to her and she’s one of the four lowest ranking students in her class.

Can Hime work hard enough to achieve her dream of being a professional voice actor? Just to what lengths will she go to succeed in her career?

Review: I really enjoyed this series!

I’ve never really thought about the process of voice acting, or what it takes to attempt all the impressions of building up your character. After reading through the series, and seeing all the trial and error that Home had to go through, I found a new appreciation for those who “create” the characters we love to watch. And it’s certainly not easy, you have to please the fans as well as staying true to the source material of that character. Sometimes you can’t please everybody, and that’s okay, you just have to keep learning and trying new ways to succeed. That’s what Hime kept doing throughout the series, failing but learning, and I thought it was a good message to provide for the readers.

Even though I really liked the story, I thought it was a bit slow. All of the big monumental character changes happen towards the last few volumes. Still, I was kind of grateful to the slower pace. It’d be sad if the series was shorter, I had fun reading each volume.

The thing that really got me though, was the feeling that a lot of the characters were dropped from the story, only to be brought back in the end for you to see the career paths they chose. Characters like Ume and Hime’s four friends rarely made an appearance and were brought back for you to see them in the future. (And what happened to Ume and Takayanagi? They were looking for someone for Ume, but I never saw if they ever found anyone.) (<I’m curious.) I also wondered about Shouma’s closeness with Mizuki, and wished for more of a backstory on those two and their friendship. Not only that but Senri had very few appearances in the beginning compared to Mizuki, so I was confused about who the actual love interest was until the end, which also had more of a change concerning those two.

Still, that characters weren’t really bad at all, most of them were really fun to read and get to know. Some may be dense, and some may be frustrating, but overall I enjoyed them all.

I felt that the ending was a bit too sudden. I’d like it if there was more details before the final epilogue pages. I still feel like there are a few elements missing, but I can’t quite discern what. But I was still really happy towards the end of the story, and can’t say that I “didn’t like” how it ended, because I did.

The art was pretty good too. At first it, I admit, it took a little getting used to, but I really enjoyed it and the detail that was put into creating all of the panels.

Overall, this was a really sweet series. I really enjoyed it, and if you like anything lighthearted, I think you will too.

More: Thank you so much for reading. If you liked this review then please hit that Like and/or Follow button. Also, please be sure to visit the Goodreads link for more of Making Minami. That’s all for now, I’ll swing by later!