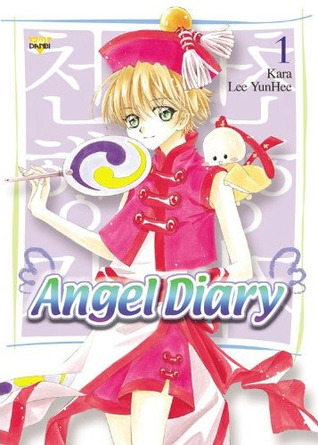 Angel Diary: After Dong-Young Whang learns she is betrothed to the King of Hell as a sign of peace between Heaven and Hell, she runs away from her luxury home in Heaven to go hide in a place called Earth. Since Dong-Young is the princess of Heaven, her marriage is important to keep up the political ties, but she refuses to marry someone she hasn’t even met.

So hiding on Earth as a teenage boy, Dong-Young tries her best to escape the watchful eyes of both Heaven and Hell who are searching for her. She’s sealed off her magic, but everyone’s still determined to find a way to bring her back.

For three years she’s stayed on Earth and has even made a friend in Bi-Wal, but time will soon tell when she must return back and face her duty.

Review: This was such a cute series!

I really enjoyed reading this, it was exactly what I needed after my short break from manga/manhwa. I’ve always been reading series that were too short, and was glad that I could find something that lasted a bit longer.

Dong-Young is your typical shoujo MC: comical, sweet, and innocent. She didn’t seem like much of a character throughout the series, but sometimes she would surprise you by her strength. However, I felt as though she became less of the main character as the series progressed. She turned into a side character for a bit, but the story centered itself around her shortly again, so everything went well.

I don’t know if it’s because there might have been a missing chapter from where I read the series, but I feel like I missed out an important part. They keep mentioning a promise happening when Bi-Wal and Dong-Young were children, but I never saw what conspired between the two. It’s fine if I knew it was just a missing chapter, but even so, I felt a big gap in the story and felt sad that there wasn’t any more details. (What I got was so vague; I knew something was supposed to be there, a backstory, but didn’t see one.) The series ended with a bunch of other backstories about almost all of the characters (even some supporting characters who barely make a scene) but nothing on Bi-Wal and Dong-Young together (like they mentioning in the story).

I felt the story shift too, but I understand that what eventually happened was probably already deeply embedded in the plot to begin with, so I’m not making any judgments about this.

I was really glad with that final chapter in the extras. I don’t want to spoil anything, but it was reassuring that each character has made their mark on Earth, and that they will always be remembered by at least one person. I think it was a nice touch to conclude the series with that chapter. It was still very entertaining with its comedy, but also heartfelt.

However I had a different opinion about the actual ending. Don’t get me wrong! I liked the note it left off with, but it was very rushed. At first, after I thought everything was finally concluding, I thought the transition to the resolution was going to be smooth. It started out that way, everything slowed a bit, but then jumped forward too much in time to (what it seemed like) the epilogue that I found it a bit distracting.

The world building was okay. How it worked is that Heaven was mainly composed of warriors, while Hell was filled of scholars. There’s different monarchies in each, and to stable each other, they had to marry off some of the royals to keep the peace. Earth and the demon realm were two separate places from them, so that’s why Dong-Young hid on Earth. The demon realm was outcasted, and nobody seemed to like them, however the people who lived there were sometimes underlings for either realm. But no one really touched their realm, and they established their own Lord to rule over them. (How that person got appointed is a spoiler, so I won’t tell.) Earth is just world filled of bustle and humans, easy for a runaway princess to hide. Much of this is revealed later in the series, but I understood most of it.

I really like older art styles, so this was something I really enjoyed looking at. I know older looking manhwas are not everybody’s cup of tea, but it actually looked a bit more modern thinking back. It wasn’t different to a lot of art styles in the shoujo manga books I usually read, but it had it’s own charm to it. 🙂

Overall, I still really enjoyed this series. If you’re looking for a cute, funny manhwa with some supernatural fantasy in it that happens to belong in the genderbender genre, then I think you’d enjoy it!

More: Thank you so much for reading! If you liked this post, then click that Follow and/or Like button below. Go and check out Lee Yun-Hee’s (writer) website (you will have to translate the page), and Kara’s Goodreads. That’s all for now, I’m sorry this was really short, but I’ll swing back again later!