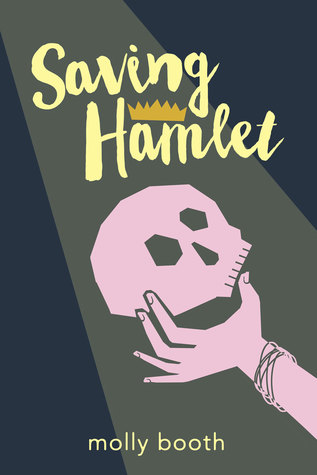 This year, with the original holder of the title of stage manager absent, it’s Emma’s job as the assistant to fill in her role. Only Emma thinks she’s way in over her head.

The new director has captured Emma’s eye, but he’s far from being the perfect director. As his controlling tirades hurt the cast, and his casting choices create a rift, Emma watches as her beloved Shakespeare production of Hamlet fall apart.

However that’s not the only thing that’s falling. Emma discovers a portal in the trapdoor to the school’s theatre when she fell through and is transported back to the first showings of Hamlet. Meeting Shakespeare and his henchmen inspires her to fix her own play, and help make it become as great as the plays in the Globe.

Then Emma discovers that even the Globe has its own troubles. Can she be able to manage and save two plays? Or will she buckle under the pressure?

Review: This was such a sweet book!

I’m not too much of a theatre nerd, yes I’ve had my share on the stage, but I still found myself relating to this book and all of Emma’s problems.

I love time travel books, that will never change. When Emma time travels, it’s not the whole plot of the story (more like the subplot) but those chapters were still very entertaining to read. Especially since she’s going back to London in the 1600s.

Molly Booth did a very great job of bringing the Globe to life. I have seen some pictures of the rebuilt version, but the description of her Globe helped me envision what it would be like in that time frame. I also admire how she handled the speech of all the characters, it was a nice touch, as well as going so far with clothing detail. (Now that’s what I call doing your research! 😉)

I loved a lot of the characters! Some were troubling, however, like Brandon, and sometimes Lulu. Lulu was intense sometimes, and had a touch of the over dramatics, but with her, she had a valid reason. Brandon’s character was a flake and unreasonable to the other character’s probing. But he does redeem himself later, so keep an eye out.

I really enjoyed Emma’s character. I thought she was funny, relatable, and resourceful. She could handle pressure a lot of the time, and would soldier on! Really, I give her a lot of credit, she had some very big shoes to fill and I was happy with the outcome.

Overall, if you like fluffy reads, time travel, lgbt+, Shakespeare, or contemporary reads, then I figure you’d enjoy this book!

More: Thank you so much for reading this review! If you want to check out Molly Booth, I have her site right here! If you enjoyed this review and want others just like it, please hit that Like/Follow button below! Have a great day, I’ll swing by later!