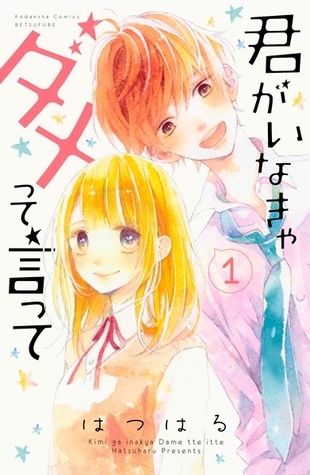 Kimi ga Inyakya Damette Tte Itte: Nayu and Oumi have always been childhood friends. Oumi will always get into some sort of trouble, and Nayu will be there to get him out of it. Nayu realizes she’s probably mothering Oumi, but that’s always been their relationship, so that’s how she believes she’ll been seen by him. However when Oumi tells her about a girl in his class he might like, Nayu’s reaction is unexpected to herself. How will she be able to confront Oumi, and how will she be able to confront herself?

Review: This was a sweet mini series.

I’ve been running out of completed manga series to read, and stumbled upon this when I was looking for more to read. The thing that captured my eye the most was the art. I really like the more modernized manga series with realistic-pretty art styles, and this certain style seemed right up my alley. I also really like shoujo, so I thought to myself, “Eh, why not?”

It was very fast paced, and sometimes that made it hard to follow. I’ve read manga series where it’s very jumpy and you have to guess what’s going on, but with this I could still follow the story and not make assumptions. However, with fast pace comes no time for development. So the story was a straight line, there was not much room for any side stories/characters. Yes, there is an extra chapter towards the end that explains one of the characters, but other than that I wish that somehow the characters could really capture the audience more. The characters were a bit average, not too different or unique in personality. Also the story, like I said, was very strict with the plot and didn’t really adapt at all. The story plot had no growth or change, and that led to it being a bit clichéd.

That doesn’t mean I still didn’t enjoy the story! I thought it was rather cute. The main characters interacted like siblings at first, which was cute, and towards the end they still were just as lively with each other as they were in the beginning. The ending didn’t disappoint me at all, even though I did expect it, I still thought it was brightening to read about.

It was really short, so it was very easy to finish. Also because there are a bit of loose ends with other characters, but I bet you can use your imagination and conclude what happens with them yourself.

Overall, if you need a short series to read, then maybe check this one out!

More: If you liked this review, and want more, then please Follow my blog! Also Like this post and I’ll make sure to write many more just like it! If you want to check out works by Hatsuharu, then click here! Thank you for reading, and I’ll swing by again later!