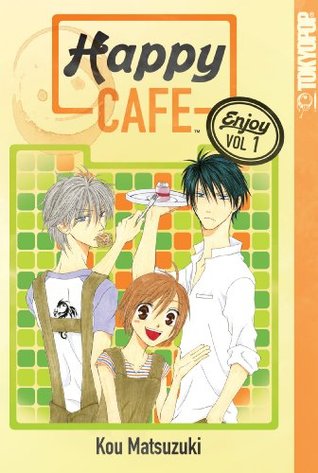 Happy Cafe: Uru decides to move out of the house after Yukie, her mother, remarries. Uru wants her mother to finally be happy after the death of her father, so she sets out to live on her own and find out a way to make a living.

However, after accidentally breaking the doorknob of a café, Uru decides to stick around and work there. Bonheur Café is exactly what the title means, “Happiness”. And with each passing day, it has become a place where she is able to smile everyday and bring happiness to her co-workers and their clients.

Review: THE WATER WORKS WERE HIGH WITH THIS ONE! 😭

Plot twist: there are unhappy moments. 😏 But it was so worth it!

The first 12 or so volumes were just your ordinary slice of life manga. Things happened, but nothing was really happening at all (plot wise). Then the last 3 volumes start focusing on the internal struggles of each character, and because the characters develop, it’s no longer a slice of life. (But I’m happy with either, it such a great story.)

If I had one word to describe this story it would be pure (and slow, but let’s go with pure at the moment). It was so cute from the start. All the characters were hilarious and I loved each of them for that reason. Even if they tried to be scary, they couldn’t. (They’re all just too lovable.)

Uru was truly one of the most adorable characters I’ve ever read about in my life. (Her face, it’s so happy!!!! 😄) She may seem really slow when it comes to thinking things, but it adds a comical aspect to the series and it makes it more fun to read with all her hilarious takes. She also has a great heart, she goes out of her way to make other people happy, and she matures a lot by doing so. However, you only start seeing that in the last two volumes, but better late then never!

Also all the supporting characters are very likable. (Some more than others.) Even those who have bad intentions have some kind of depressing background that will make you like them a little more. (Darn villains with reasons! You make it so hard to hate you!)

Also I mentioned the story being slow… it was very slow. But I was also glad that it was, because then there’d be so many volumes for me to read! Also you’d want more of the story, because a majority of the series is building up to that grand finale. I personally like reading rising action then falling action, so I highly enjoyed the “building up to the big ending”.

The art style progresses bit by bit. At first I just read the manga for the story (I wasn’t into the style so much) but I could tell that the artist was becoming familiar with drawing the characters, and in turn I was able to be familiar with how they looked as well. Also almost every page has a chibi panel, and it made the story utterly adorable.

Finally, I just want to say that there may be some tears shed. TuT They’ll most likely come during the last volume. (Maybe I’m just easily prone to doing it, but it’s worth it I tell you!)

More: Thank you for reading! If you want to check out other works by Kou Matsuzuki, I suggest you click this Amazon link here! Also if you want more reviews like this one, click that Link button and/or Follow button below! I’ll be back again later, bye!